They are everywhere. On each OS and continent. They keep a lot of amount servers and infrastructures around the world. Usually, they are hidden from the “civilians”, but still deadly important. There are simple ones, called temporary (common scenario). But there are very advanced examples as well. Sometimes they replace normal software as it’s much simpler, but sometimes they only act as a glue. Sometimes removing only 1 tiny piece of such “unimportant” element is practically impossible, as the rest part of project/infra would fall apart.

If in the future, there will be somekind of AI, which we are scared today, these have the biggest chances to be on the first line in this AI army. About what I’m talking now you may ask? About bash scripts. This subject is always up to date, for admins, devopses, programmers. Over the years, there were introduced many bad habits, practises, approaches and this is the moment to challenge them now. Now we will try to learn how to write good bash scripts today, according to todays standards. We have to, as these inconspicious scripts still are keeping everything working as expected.

Bash scripts are quite interesting topic as most new linux admins, when they only discover this area, they are so excited that they can automate every single command as they completely don’t think about some organisation or practises. They just write scripts in ad-hoc manner and later, problems with maintain will arise if we won’t keep an eye on this approach.

Today I will show you a good and bad example of a script and approach and tool, which should be your new the mandatory tool, which you should use while writing your bash scripts. Before we start, let’s have a look on this flow chart about this example script which will be used here. 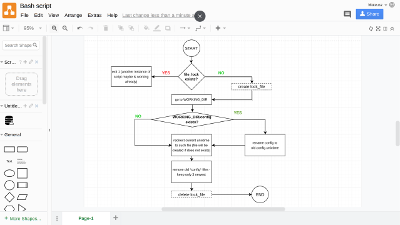 This is a very simple example. So, we start our script and instantly script checks if the file_lock file is present. This technique, this file locking mechanism, is used to prevent multiple instances of the same script working on same data. Don’t ask me why run multiple instances of the same script at the same time mostly, but let’s assume this is the case. So if our script detects a temporary file which acts as a locking mechanism, then it immediately returns with exit code different than 0, 1 in this case (for instance, this does not matter now).

If file lock does not exist then script creates this file and from that point this current instance of the script can exclusively work on it’s duties. In the next step, the script goes into WORKING_DIR directory as in this directory we will doing something with files. When script enters to this dire, it checks if WORKING_DIR/config file exists, if yes, then it renames this file to old.config.unixtimenum pattern. If this file, I mean WORKING_DIR/config does not exist, it will be simply created by using redirection with the newest unixtime taken from the script. After this, script tries to keep only the last 3 newest such files (config and old.config.unixtimenum) - rest will be removed to prevent from creating of too many such files, and possibly in the future there will be no free space because of that. And in the last step, the file lock is ofcourse removed and our script finishes it’s job. This example is very basic and perfect to show you how important good practises are and how important is to use good tool while writing bash scripts.

Before we go further, we will install shellcheck program which is some kind of linter for bash, written in Haskell. This tool will help us a lot with writing good scripts. Most popular distributions should have this program in their repositories - there are packages in Ubuntu and CentOS repositories. If you are more ambitious you may go to github page for the code and compile it by yourself.

This brings as to question: do I really need this tool to writing even simple scripts? Usually, we can meet approaches like this script has only couple lines and it's temporary. Well, from my experience 90% of scripts are not temporary and over the years they evolve to houndrets or thousands lines of code. That’s why I think a good approach is always the key, even if our script is very simple.

First, we will go over a bad example. This is the script which you should not try even run as it can remove your files. This is only for presentation purposes but it shows us many bad practises. This is a very simple example in my opinion.

I think same comments are quite enough to figure out what’s going on here. There are many errors and bad practises presented here - for instance: hardcoded file lock which is highly error prone. Imagine what would happen if there will be misspelling in file lock in one place? Moreover, we don’t check if we can even enter to the destination dir and later we are working on a dir, which maybe different from this which we would expect.

The real question here is: do we have a tool which will help us with such script? The answer is YES! I mean shellcheck of course, but not only (I will explain later on good example). If we use shellcheck, then it shows us errors, suggestions, problematic lines as you can see on the outbout below. There is also posibillity to easy integrate shellcheck with popular editors - here in the movie I show vim with syntastic plugin which uses shellcheck to verify bash script in the editor window.

Now it’s time for the good example. In this good example we will use bash set bultin for setting very important options which can help us during maintaining script. These options are also checked/suggested by shellcheck.

We use set -e to “force” error handling if a command exited with different error code than 0. In such case, we have to handle this error using pipeline operator ||, otherwise the script will immediately stops.

Another option, set -u cases script error if we try to use undefined (unbound in bash terminology) variable. Neat.

It’s worth to metion that the above options are also verified by shellcheck itself, but if we use shellcheck it’s always recommended to use these options at the same time. Please be

As you can see, this good example script is designed mostly for each unexpected case that can happen during it’s work. This is the approach from software development, it’s more demanding as it requires more code to handle corner cases, however it’s really worth this additional effort. If this script can be maintaned or developed more in the future, then we will embrace this approach sooner or later. Hence, we should use this method of writing bash script as our “default”.

Allegedly the “proper” example presented above caused some controversions and I’ve got some suggestions for improvements. Thanks for all contributors for their feedback, this is important job - my examples will be better here, and, as a result, maybe some scripts in some real projects.

What has been changed in the new version:

In my opinion $PATH is not a huge problem here and that’s why I haven’t changed anything regarding this area. If there are problems with command or event there are no some commands - script will fail anyway, hence adding code here to ensure $PATH is really not necessary.

As you can see on both examples, writing a good bash script requires some changes in mindset and approach, to more developer-oriented I would say. Using additional tool, like shellcheck is also a very good idea to improve our experience here. Such tool can provide really good suggestion to our code, not only brutal critics as some people might expect.

It may looks like overkill for some small scripts, this kind of approach, however, from my experience I may recommended this method. Yes, we have to write more code here and handle many corner cases, but then we should sleep well.